A Recent Visit to Museum of Modern Art

Last week I visited the MOMA to take in “From the Collection: 1960-1969. ” Although the Museum has 7,000 pieces in its inventory from this period, only 350 artworks were exhibited (www.moma.org)You can spend hours there – the paintings, the collages, the installations, the drawings, videos, posters and other interesting objects will bring you back to a gone-by-time. I took some pictures to show Paul some of the highlights, and he was fascinated with a 1960’s Jaguar XK-E convertible in mint condition (who would question that 🙂 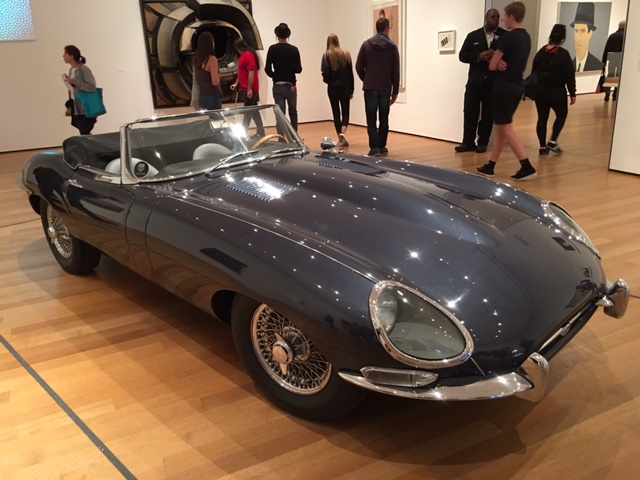 Looking like it just came off the assembly line, it was something to admire. The design was ahead of its time and the bullet look has been used in designing cars ever since the car was introduced. It is still stunning to look at after all these years.

The materials used in the installation were actually “anything goes”.

Clothes, metal, leather, electric fixtures, cable and so on were used in this “First Landing Jump” 1961 composition by Rauschenberg. He called it i”Combines”. Viewers argued was it a painting or sculpture. What do you think?

Abstract Art became a universal language and free expression. It is art that does not attempt to represent an accurate depiction of a visual reality but instead use shape, colors, forms and gestural marks to achieve its effects ( tate.org.uk) 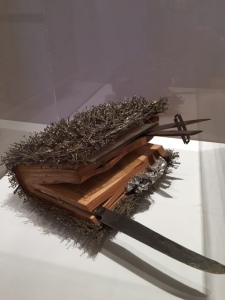 Golden Marilyn Monroe  1962 by Andy Warhol painted shortly after she commited suicide. Posters were occupying the room of art of 1967

Bob Dylan’s portrait on the poster of course was there! He was recently awarded a Nobel Prize in literature for writing lyrics for the songs! Congratulations!

I am an artist with a particular passion for oil painting and drawing, and I am curious about arts and cultures from all over the world. View all posts by Lauren Strock